A former member of Ghana Music Rights Organization (GHAMRO) under Carlos Sakyi’s administration, John Mensah Sarpong in Charge of the Northern sector of the country has taken a swipe at the present board of GHAMRO, adding that if care is not taken people like Bandex will collapse GHAMRO. “Kojo let me prophesy here that because of Bandex, GHAMRO will fail, it will fail big time, Bandex is a ‘wonderful liar’.”

Speaking with Kojo Preko Dankwa on Kasapa FM’s E – Voice entertainment last Saturday, Sarpong said GHAMRO under Kojo Antwi’s led administration thrives on lies, propaganda and deceit in running the Board. “Currently GHAMRO executives especially Bandex thrives on lies, propaganda and deceits to run the administration with the intention of destroying the former board, yet they have achieved nothing since assuming power. In seven months, they are yet to achieve anything meaningful .” The former Board member resisted an alleged attempt by Bandex to implicate him and his wife for siphoning monies from the organization.

“My wife has never taken any money from GHAMRO coffers. Where is the evidence, and even if I have passed a comment on it does it mean my wife took money from GHAMRO unlawfully.” He explained that he used his Economic Right as stated in the Copyright Law to administer his share from the Gospel All Stars Volume One song written and composed by Sarpong McAbraham. He explained that when you produce a work covered by copyright policy, you have two different kinds of rights; Economic rights which gives one the right to earn money from ones creative work while Moral rights help to protect ones reputation, it allows one to be identified as the creator of one’s work. “I was claiming what was due me by law so I have done nothing wrong.” 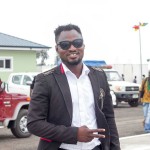