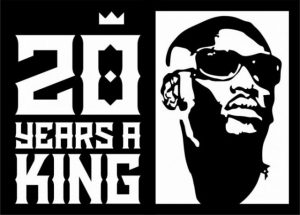 Nigerian music legend, 2Face Idibia, also known as 2Baba is celebrating a feat of feats in the music industry, such that no Afrobeats artiste can be said to have achieved. The singer has been reigning as a king for the past 20 years in music.

2Baba came into the limelight 20 years ago on the wings of a hit tune which was done by the defunct Plantashun Boiz music group. The tune is titled “Knock Mi Off”. From that time, 2Baba became known among music lovers of the time and kept up the good work all through his days in Kenis Music after having shaken the world with “African Queen.”

For 20 unbroken years, the superstar has maintained enviable dominance in an industry globally notorious for one hit wonders and short-lived careers. The number of singers that have surfaced on the music scene and disappeared in the past 20 years can’t be numbered. But 2Baba has managed to sail through and is now celebrating his longevity.

The celebration which is tagged “2Baba: #20YearsAKing”, is scheduled to run throughout 2019. It includes an array of events such as a fete, book, documentary, merchandise, album, charity work and world concert/club tour. Up 2Baba!!!