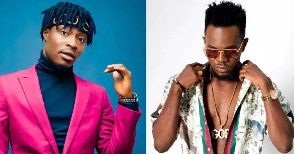 Eight people have reportedly died after ecstatic fans of tamale-based rapper Fancy Gadam and Nigerian artiste Patoranking were involved in an accident at the Northern regional capital.

According to hitznaija’s report, the accident occurred when the convoy of Fancy collided with a truck after an attempt by the Tamale-based rapper’s attempt to give his Nigerian counterpart a rousing welcome to his stronghold.

After the first collision, other incoming cars rammed into the others resulting in a chain collision resulting in deaths and injuries.

20 others have also been injured in what could be described as a freak accident.

The Nigerian artiste was billed to perform with Fancy Gadam in a concert in the Northern regional capital.

Some staff from Zylofon Cash were also reported to have been injured.