Home » News» Appiah Stadium Grovels At The Feet Of Prez Akufo-Addo…Begs For Mercy » Share To.. 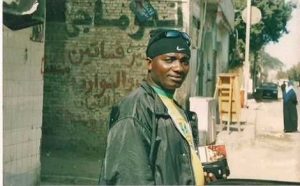 Popular Kumasi-based NDC serial caller, ‘Appiah Stadium’ is in deep hot waters after allegedly likening the first gentleman of the land, President Nana Addo Dankwa Akufo-Addo to an ape in an audio which has surfaced online.

The acerbic-tongued supporter of ex-President John Dramani Mahama is now pleading for mercy after he was exposed by a top NPP guru, Richard Adjei Mensah Ofori-Atta aka ‘Tomtom’.

Tomtom, who was part of Ghana’s delegation to the US, stated on NEAT FM’s morning show ‘Ghana Montie’, that he would make sure Appiah Stadium is dealt with by the law.

Appiah Stadium was captured in an audio circulating pouring sickening invectives on President Nana Addo during his recent visit to the United States.

The popular serial caller tagged the president a “wee smoker” and later likened him to a “monkey”.

Appiah Stadium was believed to have sent the recorded verbal abuse to some NDC platforms which was allegedly later leaked by his own group members – where it had since gone viral.

Tomtom, who was furious by the insults told NEAT FM’s morning show host, Kwesi Aboagye that he will drag the Appiah Stadium to court; and subsequently lodged a formal complaint with the security agencies.

The NPP guru wants Appiah Stadium to prove in court if indeed the president smokes ‘Wee’.

He also wants the court to severely punish Appiah Stadium for likening the president to an animal; specifically a monkey.

“Ghanaians that will travel to abroad will be monitored or properly checked at the airport to see if he/she is not hiding any narcotics in his/her luggage.”

“This unfortunate development has occurred because Appiah Stadium has labeled our cherished president as a ‘Wee’ smoker”, he complained bitterly.

But Appiah Stadium is now pleading for forgiveness after admitting he erred by ranting such unpalatable insults on the president without any provocation.