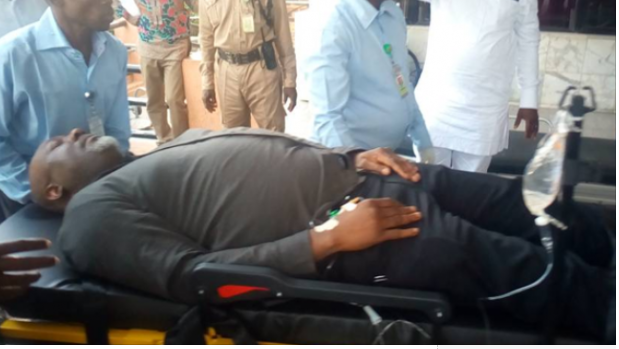 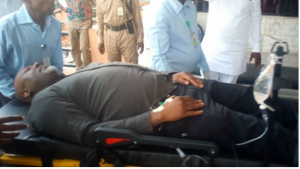 The Kogi State High Court, Lokoja, has given an interim order that the Senator representing Kogi West Senatorial District in the National Assembly, Dino Melaye be moved to the National Hospital Abuja, for further treatment.

The trial judge Justice Nasir Ajanah, gave the order on Friday after the senator’s legal counsel, Mike Ozekhome (SAN) sought for his bail.

While hearing for the bail application was being adjourned until Monday, May 7, 2018, the judge ruled that the senator must remain under the police custody while he is being transferred to the national hospital.

“Procedure Meted Out To Melaye Is A Degrading And Humiliating Treatment,” – Falana Blasts Nigerian Police

This comes barely 24 hours after Senator Melaye appeared before a Senior Magistrates Court in Kogi state, on a stretcher.

According to the Police, Melaye is being arraigned for an alleged criminal conspiracy, as two suspects had earlier in the year implicated the senator as their financier and supplier of guns to commit various crimes in the state.

He is also being tried for allegedly causing damage to government property, attempted suicide and escape from lawful custody.

As the case commenced on Thursday, the prosecution counsel Alex Izinyon, however, stated that the court did not have the jurisdiction to entertain it.

But Melaye’s lawyer in his submission argued that the court had the power by virtue of the Constitution to try the case.Furthermore, he quoted Section 97 of the Penal Code which stated that the offence of conspiracy is bailable according to the Kogi State Administration of Criminal Justice.

After a short recess, however, Chief Magistrate Suleiman Abdulahi denied the bail application and ruled that Melaye would remain in custody for the next 39 days.