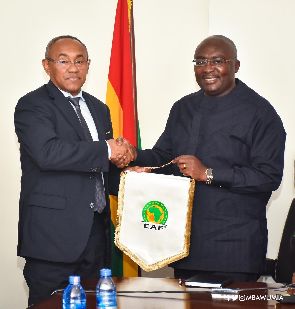 Confederation of African Football (CAF) president, Ahmad Ahmad, has paid a working visit to vice-president Mahamudu Bawumia on Friday at the Flagstaff House.

The delegation will also attend the Alhaji Sly Tetteh Memorial Lectures, which will be held in Accra on Friday evening.

A CAF Executive Committee meeting will be held in Accra on Saturday September 23 where some key decisions on African football will be taken.

The entire delegation will then travel to Cape Coast where they will watch the final match of the ongoing WAFU Cup of Nations tournament on Sunday.

The CAF delegation is expected to depart on September 25.