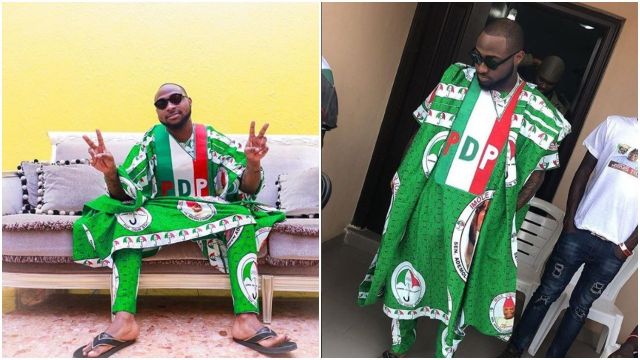 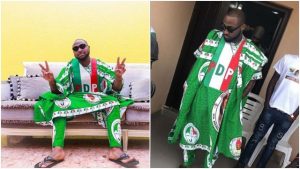 Not minding the attempt on his life during the last campaign he did for his uncle, the DMW boss, Davido has moved on with the campaign and has even stepped things up by rocking a PDP customized Agbada for the campaign.

It was revealed by the singer how an attempt was made on his life the other day during the same campaign. Being a famous singer with lots of loyal fans, Davido has what it takes to influence Osun State to all vote for his uncle who is also known as the dancing senator. Adversaries allegedly threw some tantrums to unsettle the campaign.

But instead of things going down, they are aggressively escalating and turning absolutely in favor of Davido’s uncle who stands the greatest chance of becoming Osun state’s next governor. Residents of Osun state are already confirming that Ademola Adeleke is the name on everyone’s lips at Osun state, many thanks to Davido’s campaign for him.

Davido has again been seen campaigning for his dear uncle. This time, he stepped out in a PDP customized Agabada which got people talking. Everyone is hailing Davido. But there are some who fear for him if APC eventually wins.