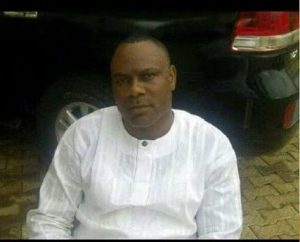 The Peoples Party of Nigeria (PPN) in Ekiti State has bemoaned the assassination of Comrade Bunmi Ojo, an All Progressives Congress (APC) chieftain and former Personal Assistant to ex-governor Segun Oni.
The party said the killing of the commissioner in the Federal Character Commission by yet-to-be-identified gunmen is a challenge to the security agencies on the safety of Nigerians in public places.

Ojo was shot dead in Ado-Ekiti on Friday night by armed killers numbering about six, who invaded a viewing centre where he had gone to watch a football match.

In a statement in Ado-Ekiti on Saturday by PPN State Publicity Secretary, Rev Moses Ajagunigbala, the party condoled with the Ojo family, his community, the APC and Ekiti State on the untimely loss of the promising Nigerian through the action of killers.

The party stated: “We call on the police to move swiftly to uncover and apprehend those behind the dastardly act with a view to ensuring such does not continue in case the killers are on a mission to exterminate some perceived enemies.

“The police must also spread their dragnet to rid the state of arms which had found their ways into wrong hands. This killing is a loud statement that arms still litter the state and indeed the country. The security agencies should step up efforts to recover all such arms. Only such could prevent repeat of such heinous crime and restore confidence of citizens on safety.

“The governorship election is behind us in Ekiti State, but the forthcoming general elections are around the corner, efforts must be in top gear to ensure peace and security of lives and property. The security agencies must not take anything for granted.

“The PPN in Ekiti State is particularly worried because of our conviction that peace is a necessary condition for the development of our state which we are craving. So, all hands must be on the deck.

“We are deeply touched by the killing of this humble Ekiti man. For a man of his status to have gone to a viewing centre with friends to watch soccer showed how humble and people-centred he was. We commiserate with with his immediate family and Ekiti State in general. It is our prayer thatGod gives the family the fortitude to bear the irreparable loss,” Ajagunigbala said.