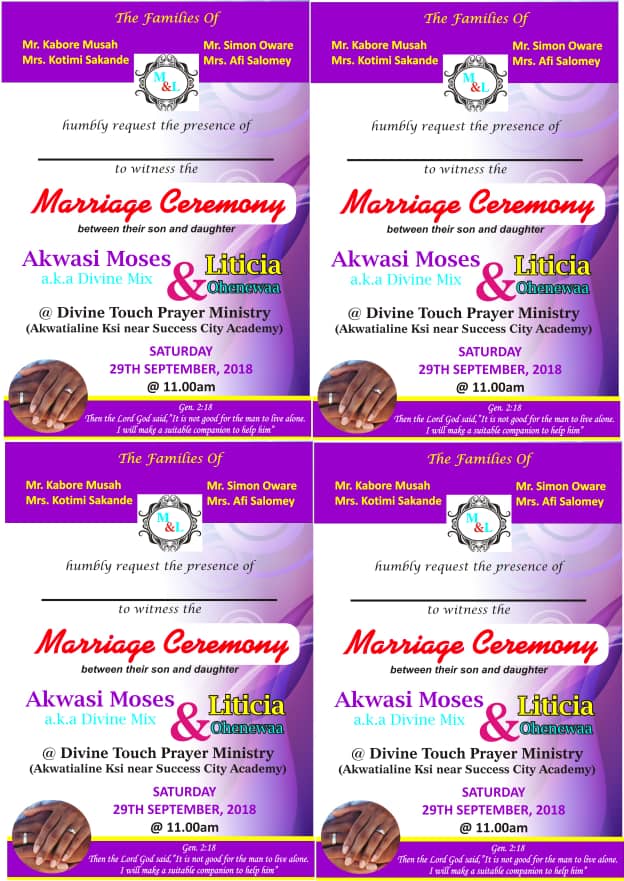 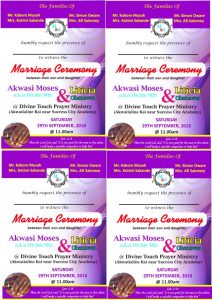 The sound engineer producer and musician,Evangelist Akwasi Kabore Abdulaih Moses is set to tie the knot on Saturday the 6th of September,2018 with a lady he has refused to disclose the identity.
Speaking in an interview on Hitzgh Radio’s popular show Up and Coming Event the once a Muslim activist, a secular mucician and band player Evangelist Moses confimed that he will indeed tie the knot on the said date at the Divine Touch Prayer Ministry near Kumasi Technical University(KTI), Akwatia-line. He pointed that people like Obeng mix, Delion, Pastor Solomon, Boshyeba Joshua and Minister Appiah will grace the ceremony so people should come in their numbers to support him.
The Evangelist made it known that he was once a womanizer but by the Grace of God he has not had any affair with any woman for the past six years on his conviction from Islam to Christianity
According to him no one introduced him to God but God but an encounter with a woman that led to pregnancy and unsafe abortion that put her life at risk was what changed his life.
Evangelist Moses also stressed that he is Ghanaian and not a foreigner as some people have been saying.He said he lived at Amoah krom win the Western Region with his dad a farmer and later to his mother’s home town Kodie-Tepa in the Ashanti Region but he has had the opportunity to travel to many African countries like Abidjan,Mali,Niger,Kenya and Togo.
The Evangelist also explained that his Pastor, Pastor Solomon has helped him greatly in his ministry.He explained that Ghanaian should rather seek God and not miracles because it will be better for one to make heaven than to have all the riches in the world. He added that if people do that they will never fall into the prey of false prophets.Evangelist Moses has produced many great musicians like Brother Sammy,Augustina Addison,Onyameba Betty and many more.He has also made hit songs like Tumi w) ni mu and Ayeyi wura. He added that for copies of his songs one can contact Big T, Hitznaija and Hitxgh.
In addition he said he is not with Zylofone Media because he must consult God before he takes any decision so he is still praying about it.
To this end, Obolo base also explained that Evangelist Moses is a very God fearing and humble man so everyone should come and support him tie the knot on the D-day.