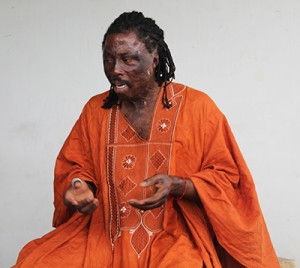 According to AdomOnline, fetish priest, Nana Kwaku Bonsam has been accused of leading about 40 thugs to assault a middle-aged man for ‘insulting’ him.
36-year-old Collins Manu who stormed the offices of AdomOnline with bruises and wearing a neck brace claimed the thugs after assaulting him also made away with an amount of GHc 30,000 which he had in a brown envelope in his car.
“He experienced severe tenderness at the cervical region, the lower quarter of the abdomen…he later ran into shock which we have to resuscitate him back to life. Client condition is very critical and pending further investigations…,” a medical report authored on 27th July, 2015 and signed by Dr. Duray Emmanuel, Physician Assistant (Medical) at the Ga West Municipal Hospital, Amasaman stated.
The aluminium fabricator told AdomOnline that his ordeal commenced after he was accused by Kwaku Bonsam of ‘insulting him’ while asking for directions to his signpost on the Sapeiman road on the 26th July, 2015.
According to Manu, the signpost would have helped him locate the residence of a customer, one Madam Portia who had ordered for aluminium flames.
“We were not familiar with the area so we asked a maize seller who directed us to go forward where we will see Kwaku Bonsam’s signboard. Before, I moved the car, a guy standing a little far from my car shouted and said I should be careful of how I mention Nana Kwaku Bonsam’s name in that area… then I heard him say Kwaku Bonsam has got boys in the area who can beat us…,” Manu said.
Manu who drove in a Nissan Premier Caravan with registration number, GE 9406-09 which was loaded with glass and aluminum frames said the caution thrown by the young came to reality when after negotiating a curve which was some few metres away from the spot where he asked for directions, he met Kwaku Bonsam who was in the company of about thirty to forty thugs.
“After turning on a sharp curve, I saw about 35 to 40 guys standing by the roadside. They surrounded my car as I drove close. So one rastaman with scars on his face came to me and asked me why I am (was) insulting him and I said I haven’t insulted him,” he said.
Mr. Bonsam who was not satisfied with the answer, Manu said, led him back to the maize seller who indeed confirmed he never insulted the fetish priest. The confirmation from the roadside seller notwithstanding, the aluminium fabricator said he was pushed by one person from the crowd.
The dissatisfied fetish priest also called in ‘a guy in Jalabia’ as another witness who claimed the fabricator insulted the fetish priest that “he is stupid and senseless” causing Kwaku Bonsam to slap Manu three times.
But for the intervention of three young men who sneaked through the crowd and snatched a cement block which Mr. Bonsam had raised above his head while he laid on the ground, Manu said he [Kwaku Bonsam] would have lynched him.
After failing to lynch him, Collins Manu said Kwaku Bonsam further threatened to shoot him and burn his car “and no one in Ghana, not even the police, President John Mahama or the IGP can do anything to him”.
The intimidating words from the fetish priest, Manu said forced him to kneel in front of Mr. Bonsam and beg him for mercy.
“…but he didn’t listen and he beat me the more with his guys and pulled my shirt while my shirt had pulled out of my mouth and he and his guys were dragging me on the floor,” he narrated.
Collins Manu concluded his statement to the Amasaman Police that he was rescued by Kwaku Bonsam’s nephew who was his friend. The savior whom he named as Owusu and another woman, he said helped to the roadside to board a taxi home that evening.
Kwaku Bonsam confirmed the incident to Adom News but declined to comment adding that the case is with the Amasaman police.
The Amasaman Police however declined to comment when contacted by Adom News.
Article Tags:
Fetish priest Kwaku Bonsam leads 40 macho men to assault man · Kwaku Bonsam
Article Categories:
News
For Promo Call: +233 (0)245 464 567