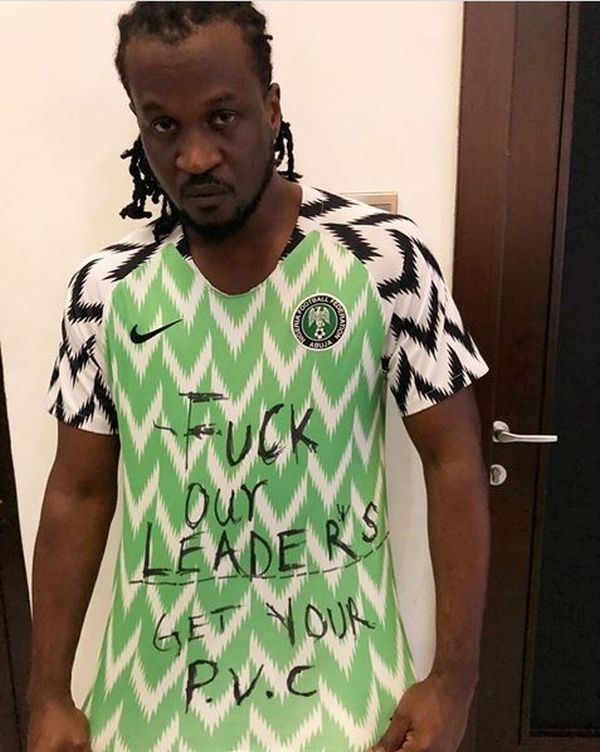 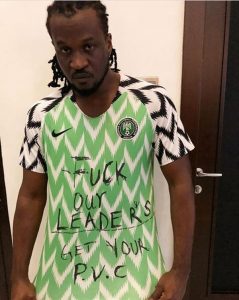 It’s no news that Mikel Obi has failed to keep the promise he made to the president and the Nigerian people about bringing home the World Cup, and none is to blame for the failed promise than the president himself, as said by many.

Nigerians have been like; “how could Super Eagles have sailed through in their game against Argentina with all the ongoing calamity in the country? The blood of dead innocent souls is trailing the country, so nothing good can come.”

Now, Rudeboy has joined the masses to fire shots at the seemingly failing Nigerian government, and he fired his shots with so much bitterness of heart. He also made it a bit dramatic, as he took to his IG page to share a photo of him wearing Super Eagles Jersey on which it is boldly written; “Fuck our leaders!! Get your PVC ready!!!”

Escorting that post was the following tag; “The blood of the dead has taken over. God is angry with us.” He concluded his backlash by encouraging Super Eagles saying; “Well done guys.” But folks are now asking; “who are we voting for?” It seems everyone is asking everyone to get PVC in readiness for 2019 election without knowing yet who to vote for.