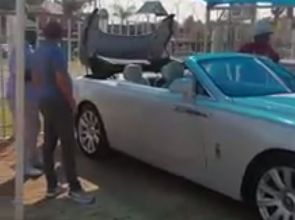 Grace Mugabe’s eldest son celebrated his acquisition of two Rolls Royce vehicles worth millions with friends and French champagne at the weekend in Zimbabwe.

IOL reported that the luxury vehicles were delivered aboard a KLM aircraft at Harare International Airport.

The vehicles were imported by Russell Goreraza – Mugabe’s eldest son‚ from her first marriage – and their arrival in the capital was greeted with a large celebration.

He has a reputation for living comfortably‚ as do his younger brothers Robert Jnr and Chatunga.

Grace Mugabe is back in the spotlight on Tuesday when lobby group AfriForum approaches the High Court in Pretoria in connection with her alleged assault of Gabriella Engels at a Johannesburg hotel.

AfriForum wants the first lady to be held accountable and be cited as a respondent in the assault case.

Mugabe has since claimed that Engels was the aggressor during the fracas.

President Robert Mugabe and the first lady are attending the United Nations General Assembly in New York‚ accompanied by a large delegation‚ including his family.

The Standard newspaper in Zimbabwe on Sunday described the trip as a shopping excursion at the expense of taxpayers. Reports suggested that each member of the delegation‚ numbering around 70‚ would receive a generous daily allowance