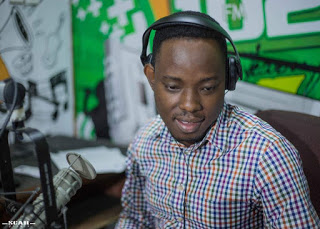 Born Ebenezer Donkoh and known in the showbiz fraternity as NY DJ , he is a graduate of the Kwame Nkrumah University of Science and Technology with Bachelo rs Degree in French and English, he happens to be the f ourth son out of six and the chief servant of Ghana’s Hub f or Pop Culture & Urban Entertainment News –www.nydjlive.com , and is the proud host of RYSENSHYNE, an alternate contemporary urban rad io morning show which airs on Y102.5FM each workday in Kumasi ( each morning from 6am to 9am ) .

In an interview with Dawuroo.com , NY DJ, as he is passionately called by the masses revealed that, he started radio work back in 2007. He recalled by saying, “ This was after I had heard my cousin (then DJ X Ray, now Kojo Akoto Boateng with Citi FM) host a radio show on Focus 94.3FM (KNUST). With my love for presentation, I felt I could easily do radio and spoke to him about it. He therefore gave me the shot right after my WASSCE in 2006 .

Starting off as an observer, I sat in the studios with him as I watched him play music and host his show. I graduated to a producer and eventually the host of one of the evening shows. Since then, I was given other musical and entertainment shows to host which I did with exception. I won the heart of many listeners and that’s how it all started ”.

Lamenting on how blogging started for him, he revealed saying, “ With regards to blogging, I realized there was very little content on entertainment issues that went on in Kumasi and as I did a lot of interviews, I felt the need to get such content online so others outside the city could be updated on events happening in the city. That’s how it started”.

Believing in doing what he knows how to do best, the radio presenter and blogger built a strong authority on entertain ment issues since that is what he practis ed , it was easier for him to connect to everyone who mattered in that field. Generating news from that end was not a problem so it was so easy to come out with information Andrews many others could not easily have access to.

Again, owing to his oratory and writing skills , NY DJ was the debating team president and Vice President to the Student Representative Counc il (SRC) back in Kumasi Academy. Being able to easily pen down his articles and having a s trong command ov er the language was also a plus for him.