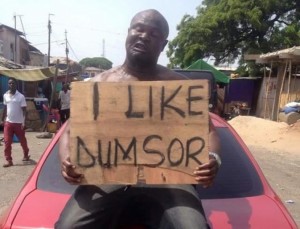 Boxer, musician and celebrity in his own right, Braimah Kamoko, aka Bukom Banku, is livid with anger over the sustained protestations by Ghanaians over the country’s running energy crisis.
He plans his own anti dumsor vigil in which he is rallying the public to pray for President Mahama as he seeks solutions to end the problem.
In an interview on Radio Gold Tuesday, Bukom Banku said his decision not to partake in the demonstration was because of his love for the president.
He is of the belief that the energy crisis is not the doing of President Mahama because the crisis has been experienced even under the era of Dr Kwame Nkrumah, Presidents Rawlings, Kufuor and Atta Mills.
In the meantime he thinks the demonstrations are unproductive and just too many, and an attempt to distract the president from finding a lasting solution to the problem.
“Why, is John Mahama killing the light?” he quipped repeatedly, demanding of the protestors if the President was responsible for the current power challenges.
“If something is wrong, let us pray. Let’s pray for the president and the problem will be solved once and for all. Why do you want to kill the president? All the celebrities go to demonstration to kill John Mahama,” he said.
“I will pray all the time and John Mahama will solve the light problem because he is our president. Demonstration cannot solve anything,” he stated.