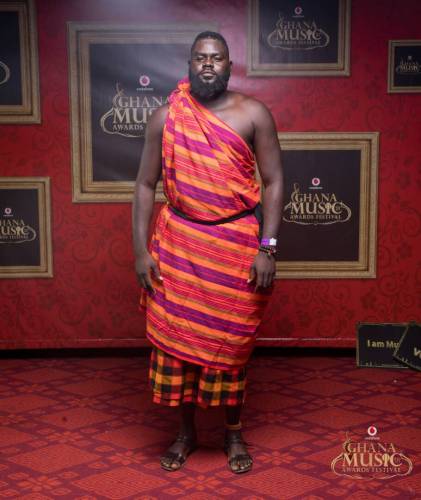 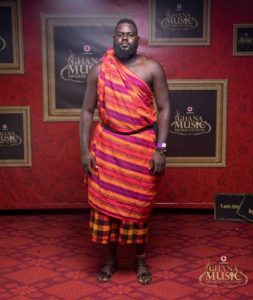 The just ended Vodafone Ghana Music Awards came to success as Stonebwoy, Shatta Wale, Samini, Sarkodie, Kwesi Arthur and many others won themselves Awards with the Late Ebony Reigns clinching the ultimate award which is the Artiste of the Year.

On the night of the event, the Red Carpet was glittering as Artiste, Actresses, Producers, Industry Players and Music Fans represented in some of the most expensive, beautiful and awful attires as well. Though not all on the Red Carpet were captured on the Television, there were some attendees whose appearance caught the eyes of the Photographers present and one really got the nation talking.

Looking tall and all built up, Glenn Samm, a Ghanaian Blogger, represented well in one of the Weirdest yet amazing outfits on the night of the Awards. He blew the minds of Ghanaians dressed up like a “Masai”. He confirmed that indeed he adapted his way of dressing from Masai, a tribe from Kenya and northern Tanzania and as a part-time model he got inspired by their way of dressing when he last visited the country.

Glenn Samuel Semakor popularly known as GlennSamm was born on the 29th of June, 1987 in the Greater Accra. He attended Celestial School Complex in Ashaiman, went to Sogakofe Senior high where he studied visual arts and completed in 2006. He also went to exopa modelling school and did Graphic designing with IPMC. He doubles as a Blogger for EboxAfrica.com and has contributed a lot to the Music and Entertainment Industry in Ghana.

According to him through his interruption with them he got to know that were warriors and to him to survive in our generation, he believe one must be a king of a queen so he represents #KvngsOfTheNewSchool.