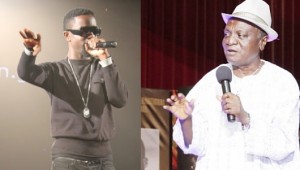 Highlife Legend, Nana Kwame Ampadu has revealed that he was ‘embarrassed’ and amazed by hip-life musician, Sarkodie when he came to his studios to collaborate with him to produce a new song.

The ‘King of Music’ narrated on Adom FM’s Drive Time show, ‘Ofiekwanso’ on Thursday that the ‘embarrassment’ happened when he gave the celebrated rapper the opportunity to insert his lyrics into a yet to be released song.

“The moment he stepped into the studio, I told him I have left some vacant places in the song for him to fill with his own lyrics and after listening to the songs…he asked for a replay and after that was done, he scribbled some few words and asked for permission to use the performing room…,” he said.

According to Nana Ampadu, Sarkodie readily sang and put in the right lyrics within 30 minutes, and he was amazed and ‘embarrassed’ by the speed with which Sarkodie unleashed his talent.

“The gentleman sang very well and that really showed how talented he is as a musician…indeed I was very impressed after that display of talent…,” he said.

The highlife musician who is credited with more than seven hundred songs including many hits revealed that his admiration for arguably the fastest Ghanaian rapper increased after he declined to charge him for contributing to the success of his song.

“When I asked him how much he would charge me for featuring on the song, he responded that he should have rather paid a legend like me for doing him the honour of featuring him in my song…,” Nana Ampadu said.

However, the song could not be released last year due to Nana Ampadu’s ill-health..

“I was taken ill so I couldn’t release the song as had been planned…and that was a very sad one…,” he added.

Nana Ampadu further assured music lovers that he would release the song next year to celebrate fifty years in the music industry.