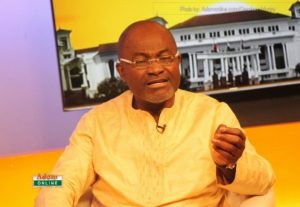 It is emerging that the controversial leaked tape of the meeting of opposition National Democratic Congress’ (NDC’s) National Communication Team leaked to Kennedy Agyapong by an NDC insider cost the Assin Central MP GH¢5000.

The meeting which lasted more than 2 hours was recorded and sold to the Member to Parliament for Assin Central Kennedy Agyapong two weeks ago, MyNewsGh.com learnt, and he paid cash for it.

A staff of Oman FM close to Kenneth Agyapong, eldest son of Kennedy Agyapong who is Manager of Kencity Media told MyNewsGh.com that although the identity of the NDC mole was known only to Kennedy Agyapong and some two officials at the Jubilee House, he knows Kennedy Agyapong paid GH¢ 5000 cash for the secret audio.This was in the aftermath of the Ayawaso West Wuogon Constituency when Kennedy Agyapong was approached by the mole with the information requesting for Ghc20,000 cash. To convince the NPP official to know how serious the tape is, the unknown mole sent short teasers of the audio capturing Ofosu-Ampofo to Kennedy Agyapong via whatsapp, before finally the full recording was released. It is unclear how they settled on GH¢ 5000 from the GH¢ 20,000 demand.

The details of the 2 hour 30 minutes tape which was first played on Oman FM and has generated controversy has since attracted wide condemnation conditional on the establishment of the true identity of the voice. Many say it is Samuel Ofosu-Ampofo, NDC National Chairman.

In the tape, alleged top officials of the NDC communication team, including members of Parliament were heard plotting on how to smear the Akufo-Addo government in general and Vice President Dr Mahamudu Bawumia in particular. A

The recording was done by someone who is believed to be a part of the Sammy Gyamfi-led National Communication team.

The Honourable Kennedy Agyapong revealed last week on Oman FM when 8 minutes of the tape was played that he usually pays handsomely for people who bring him information.

Some of the actors allegedly captured on the tape include Haruna Iddrisu, Alfred Ogbamey, Sammy Gyamfi, Ofosu-Ampofo among other big ‘fishes’ in the NDC.

Mr Ofosu-Ampofo explains circumstances leading to his party’s withdrawal from the Ayawaso West Wuogon by-election marred by violence. He also reveals the party’s plan for the 2020 elections. The National Chairman also okays the politics of insults targeting the Peace Council Chairman and the EC Boss.

The audio has put the party under pressure following concerns about the destabilising activities of party militias. The audio raises questions about the commitment of the two main political parties, the governing New Patriotic Party (NPP) and opposition NDC to disband their militias.
Meanwhile you have Chief Azorka in my meeting saying, Chief thank you, I said why, he said if you had not taken this decision I don’t know how my men would have gone back to Tamale. The issue is that they had brought down the Kandahar Boys and the Kandahar boys know our boys from Tamale. You know it was a targeted attack and so once they spot you they invite them, and then around that time my people were so defenseless and they had packed themselves in pickups so cordon off and hounding them was very very easy and they had not anticipated all these things coming so it hasn’t been easy but for me how we take the battle from here is most critical.

“It is a question of mind game that they’ve come to play, I was here because I thought I should come and lift your spirits up and let you know that it was not a cowardice decision at all. It was a strategic decision which will benefit us,” Ofosu Ampofo added.