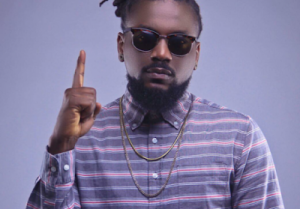 Dance hall artiste Samini is embarking on a project to help reduce incidents of domestic violence and abuse.

In keeping with this, he has instituted the Obimbra Foundation which focuses on giving voice to the voiceless and spearheading the campaign against domestic abuse through strategic plans and initiatives.
The musician who is also a philanthropist, has joined forces with Africa 1 Media and Empire Group, with the support of EIB Network, to carry out this project.

In honour of Mother’s Day the foundation will celebrate 50 heroines in style with a tailored event to show love, shower with gifts, entertain and encourage the selected women.

The worrying increase in domestic abuse cases and the plight of the victims of such abuses have been a matter of concern to many because of the untold emotional, psychological and physical cars it leaves on the victims.

Usually, for fear of being accused of provocation, ridiculed and ostracized from society, victims are forced to endure the torture of living in cycles of threat and abuse.

The Obimbra Foundation, built upon the Akan word ‘Obimbra,’ means ‘a cry for help.’

For about 15 years of being in the music industry, Samini has carved a niche for himself for consistently churning out quality music like ‘Linda,’ ‘Odo,’ ‘My Own’, among others.