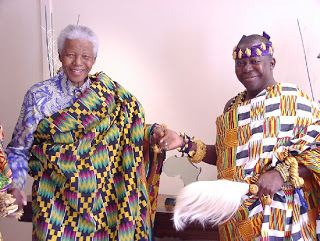 The revelation was made by the Ghana International Bank in a response to claims that it unfairly dismissed an official, Mark Frank Arthur, for assisting to transfer £350,000 into the personal account of the King.

The former manager is in court to challenge his dismissal by the Bank for agreeing to transport and transfer the huge money on behalf of the Asantehene.

Mr Arthur had said he agreed to do the transaction because he is a subject of the Asantehene and he could not bring himself to question him over where he got the money from.

But in a sharp response Wednesday, the Bank said it found the manager’s explanation for his action to be unconvincing.

“The claimant [Mr Arthur] did not check the diplomatic passport was valid and in fact, it was expired. Even, if it had not expired, the claimant would have still have to follow the Respondent’s [Bank] processes which he failed to do,” the statement said.

The Manhyia Palace has dismissed claims that the Asantehene erred when he directed the colossal amount to be transferred to Jersey, an Island in UK.

Joy News sources at the Palace said Otumfuor Osei Tutu II is a man of good standing who has properties across the world including the UK.

They believe the management of the Ghana International Bank has proven to be unfair in its dealing with the Asantehene in the past.

But while Mr Arthur is calling for reinstatement, the bank set its action is justified.

Responding to media queries after the story made the headlines, the bank rejected the allegations made by Mr Arthur adding it will vigorously defend its position.

According to the bank, it terminated Mr Arthur’s employment “for gross misconduct, gross negligence and breach of confidence. The decision to dismiss was upheld by an independent third party who found the claimant had made a ‘catastrophic error of judgement.’”

It also explained why its responses to the allegations made by the sacked manager.

Below is the bank’s statement: 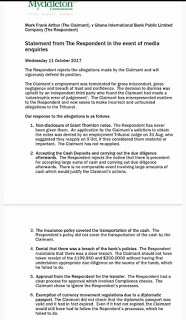