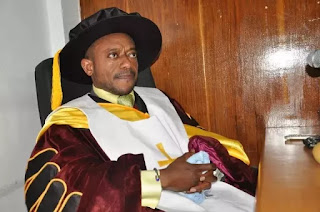 Controversial ‘man of God’, Prophet Owusu Bempah as disclosed how many times he prays for President Nana Addo Dankwa-Akufo Addo. The self-acclaimed ‘prophet of the nation’ said given the heavy mandate on the President’s shoulders, he needs more prayers. Therefore he prays for him more than four times daily, every day. “For prayers, I pray for the President in the morning, afternoon, evening and midnight,” he disclosed.

Rev. Owusu Bempah made this revelation when he spoke on GHOne morning programme, ‘GH Today’ from the Accra International Conference Centre (AICC) on Thursday. He is currently at the AICC and seated with other dignitaries including Rev Joyce Aryee, Dr. Lawrence Tetteh, and Prophet Kobe for the ongoing one year celebration of NPP’s victory in the 2016 general elections. According to Owusu Bempah, the President’s achievements since he assumed power in January this year are unprecedented.

He explained that President Akufo Addo has so far proved to be an honest man by being able to enrol some of his campaign promises. In this vein, he called on Ghanaians to join in prayers for the President so he could continue with the good work he is doing for the country.

“Apart from Nana Addo, I have not seen any President achieving a political campaign promises within such a short time.” “This shows he is honest and so Ghanaians must also pray for him to continue working,” Owusu Bempah said. Touching on former President Mahama’s political ambition, Owusu Bempah said he had been informed by God that that won’t happen again. He explained that whatever different venture the former President goes into will be successful. However, when he attempts the presidency again he would fail, Owusu Bempah disclosed.