Sarkodie – Adom FM is the best station in the world

Home » News» Sarkodie – Adom FM is the best station in the world » Share To.. 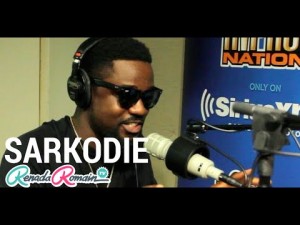 Ghana’s most celebrated rapper and multiple award-winning hip-life artiste, Sarkodie says Adom FM is the best radio station in the world. The 2012 BET Best International Act Award winner, known in private life as Michael Owusu Addo, admitted he feels happy anytime he listens to Ghana’s number one radio station because he feels like he is part of the employees and family of Adom FM.

“I feel at home whenever I listen to Adom FM, at a point in time some of my friends even thought I work at the station because I listen every day,” he said during an interview with Dr. Pounds on “Hitz Gallery” on Hitz FM about his new and 4th album, “Mary”, due for launch this Saturday.

According to Sarkodie, Adom FM is home for him because he remembers the first day he came to the station in his bathroom slippers (Charley Wotey) and he was asked to rap on commercial jingles. “Adom FM has really helped me a lot to come this far and the name of the station alone makes me happy,” he said. “I can’t buy anything to thank Adom FM enough because the station is priceless, so I will urge the station to organize an event and use my name for the headline and I will perform for free to show my gratitude,” he promised. “We can name the show ‘Adom FM Sarkodie Apollo Ghana Version’”.

Touching on his new album “Mary”, Sarkodie said he named the album after late grandmother, because she passed away on the same day he got his first BET nomination. “My grandma has always encouraged me in my music career so this album is to honour her memory,” he said. The new album, which was produced by songwriter/musician Akwaboah, features Akwaboah himself, and some of the finest in the country such as R-2bees, Efya, Obrafuor, Chase, high-life legend Pat Thomas, Mugeez and others.

The album also comes with the “New Guy” track featuring Afro-American hip-hop star Ace Hood. Another single off the album, “Mewu”, featuring Akwaboah was released a month ago. Sarkodie said the album launch will feature EL, Obrafuor, Akwaboah, Efya and many other local celebrates. He is inviting his fans and the general public to be at West Hills Mall for close interaction with him and for autographs and some free branded t-shirts.