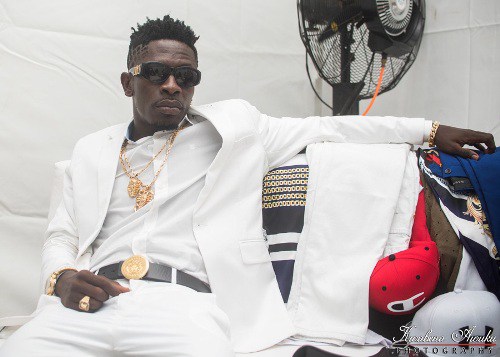 Home » News» Shatta Wale Reveals What He Hates ABout His Fans Despite They Defending Him Always » Share To..

Shatta Wale was recently hosted on Vibes In 5 with Arnold, and he made quite some interesting revelations.
He admitted love for Pluzz FM, indicating he wants to rule the Ghana music industry like Jerry John Rawlings, and interestingly revealed his worst fear was the police grabbing him after destroying Charter House’s chairs.

In a hard to believe reveal, he claimed the chains he was wearing to the interview costed GHC 8500 and GHC 7500. Well that’s what he says, adding that he has four other ones around the same amount.

On what he loves about his fans, he said he loves how they are matured and don’t allow people to take decisions for them.

As to what he hates, he said;

“Sometimes when they call me at dawn”, adding that some claim they’re his fans and could call him anytime.”

On how it makes him feel, he said it feels great and he feels blessed.
Watch the interview below!

The post Shatta Wale Reveals What He Hates ABout His Fans Despite They Defending Him Always appeared first on DisturbingGH.

The post Shatta Wale Reveals What He Hates ABout His Fans Despite They Defending Him Always appeared first on Expose Africa.