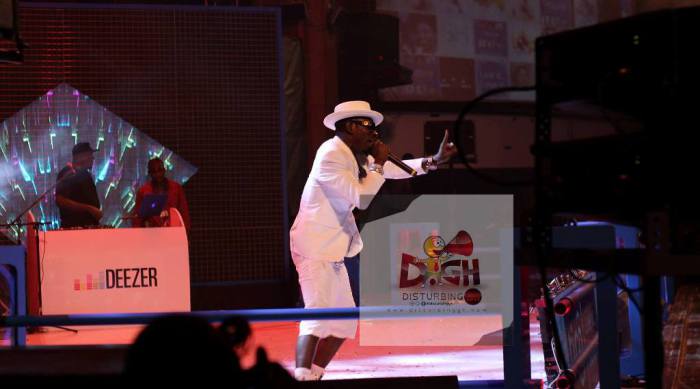 Touted “Local Champion”, Shatta Wale rose to the occassion to save Ghana at the just ended Tigo’s Ghana Meets Naija Concert which took place at the Accra International Conference Center in Accra on the 21st of May 2016.
A colourful the night was which saw Pappy Kojo, E.L and Shatta Wale representing the Ghanaian side with Olamide, Flavour and Harrysongs flying the Nigerian flag. It was a battle of who had the best from jollof, music performers, ladies, dressing and loads of others stuffs included.
The show began with a performance from Nii Funny and NKZ Music’s Guru was a surprise act for the show. VVIP followed up with their hit songs which put the crowd on their feet as they sang along continuously. First time personally seeing Mr Eazi do his thing on stage and he was not bad at all. The Bankulize hit maker brought on stage Eugy from London as they did their thing together.

First set for the main event popped up and Pappy Kojo came out with the Fante Swag as usual. His performance was the usual thing we have always seen and it had nothing new. The challenger Harry Song who was in Ghana for the first time went along with his own thing and ended up giving a massive support to Ghanaian jollof which showed the superiority of Ghanaians in there.

Round 2 saw E.L begin the game and there were some technical issues which didn’t allow things to go as planned. His planned performance which was preceded by some stunts went bleak as the equipment for the DJ went totally off. The reigning artiste of the year wished to have made certain comments but just had to let it go for the sake of peace. A few songs and backed with Lil Shaker and he was done.

YBNL’s Olamide was in Ghana to perform for the first time and well i was really surprised to see that loads of Ghanaians who i perfectly know couldn’t understand the Yoruba language still vibe along with him. The ‘Who You Epp’ hitmaker just showed he was worth every single second spent on stage. Back to back response from the crowd though. He was preceded by an entry performance from Victor who is newly signed to his label.

Finally, it was time for round 3 and the local champion himself was there to show off what he had. Shatta Wale is an entertainer, no doubt about it. From ‘Bandana from Ghana, Mahama Paper, Kakai, Hol’ It’ and the list never ended. It seems he was the ‘Saviour’ sent from above to deliver Ghana from shame. The Korle Gonno godfather was the best performer for the Ghanaian side.

Mr Flavour N’abania is a true performer. The Nigerian artiste knows what he is about and why he was brought to show off. Back with live band, everything he did was just on point. Nothing boring to make you doubt his competence.
In the end, it was a great show and the Nigerians proved to be the best entertainers. Tigo’s Ghana Meets Naija was brought to you by Millicom Ghana Limited owners of Tigo Ghana and Empire Entertainment.