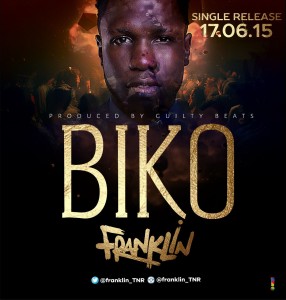 Afrobeats and HipHop solo artiste Franklin is finally set to release His long awaited single “ BIKO”.
In a tweet, he announced that his latest single BIKO is all cooked and ready to be served to his fans. Franklin is the latest kid on the block and as such promises his fans more good music!
BIKO was mastered and produced by Ghanaian Sound engineer and producer, Guilty Beats.
The track will be officially released and put up for downloads on 17th June, 2015. Stay Tuned!
Artiste Name: Franklin
Track Title: BIKO
Prod. By : Guilty Beats
Release date : 17th June, 2015.
Article Categories:
Featured · News
For Promo Call: +233 (0)245 464 567