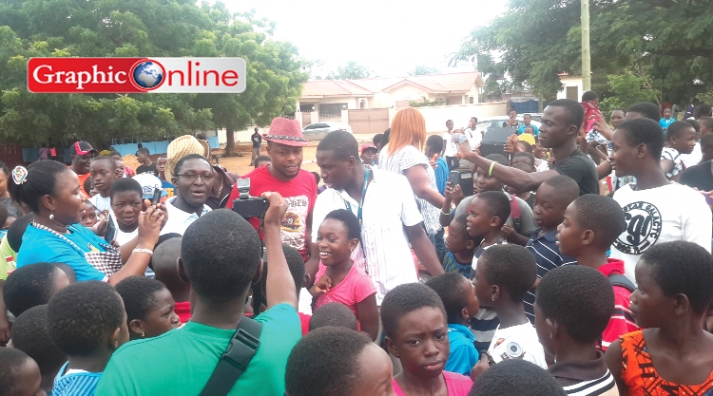 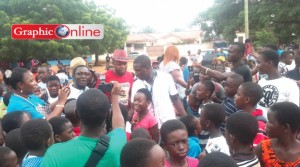 There was a near stampede at the premises of the Victory Presbyterian Church School at Fafraha near Adenta in Accra as teachers and pupils as well as residents in the Adenta SSNIT Flats and its environs struggled for space to catch a glimpse of popular comedian, Kalybos.

His arrival temporarily brought all activities on the school compound, which was part of the 20th anniversary celebration of the school, to a standstill as almost everyone wanted to be the first to behold the household name, Kalybos.

Everybody suddenly became photographers as they pulled out their mobile phones and tablets to take photos of Kalybos.

It took the managers of the comedian and the event organisers to inject sanity on the event grounds.

Kalybos was invited as a guest judge at a cooking contest involving parents and their children of the school to herald the climax the 20th anniversary celebration which falls on Saturday, October 10.

While the cooking was on-going, the children had wonderful time with the comedian, who organised musical chairs and dancing competitions for the children.

He also took photographs with them and interacted with teachers and parents as well.

The Director of the school, Rev Florence A.B. Simpson and Kalybos presented the prizes to the contestants, who provided enough food for the day.

Presenting the awards to the overall winners, Kalybos reminded the contestants that there were no losers in such a contest as all contestants had something to take home.